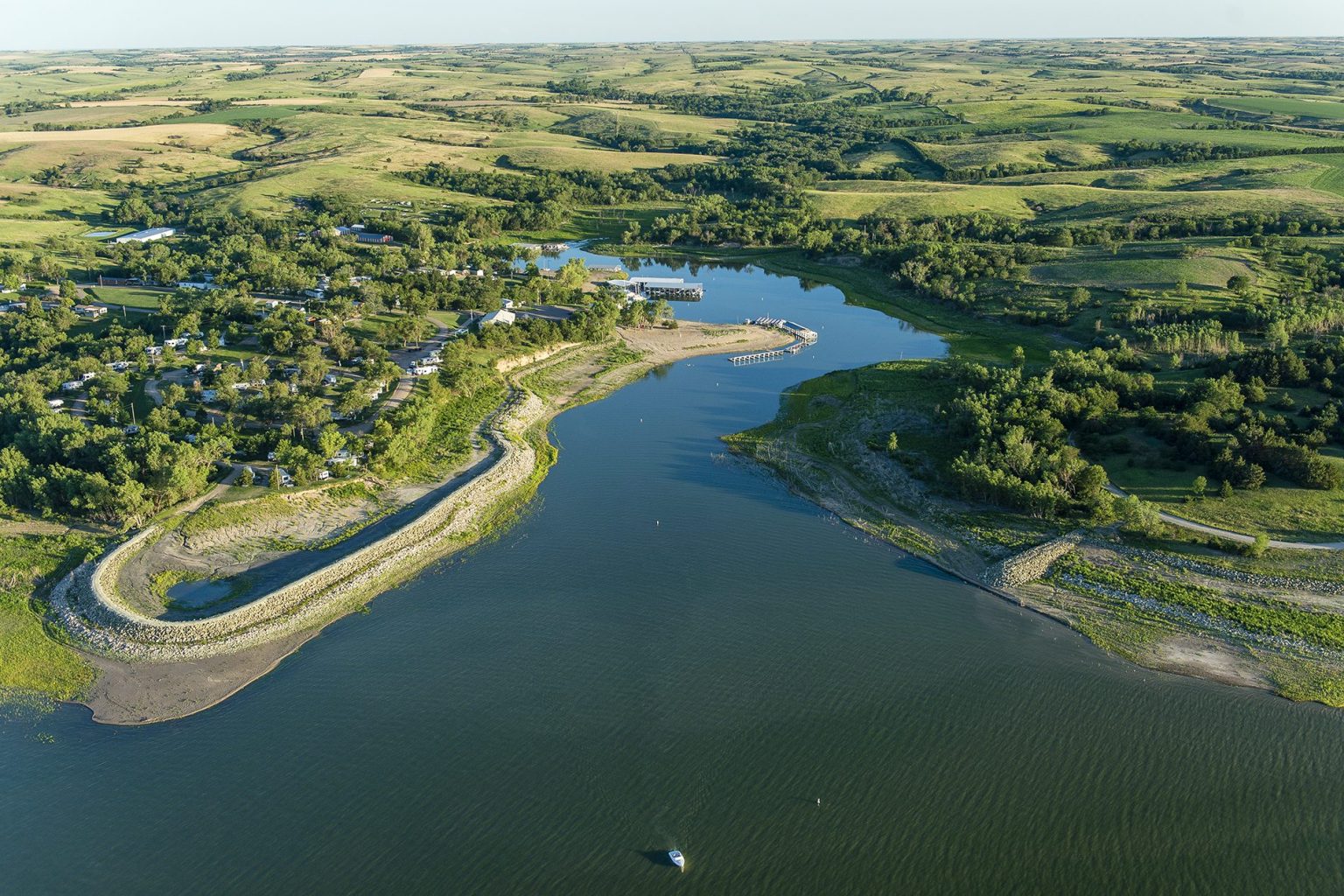 Located in Harlan County, immediately south of Republican City near the Kansas border on the Republican River. The upland area includes 17,750 acres while the reservoir contains 13,338 acres of surface water at full pool. Harlan Reservoir is the second largest lake in Nebraska and at normal water levels provides 75-miles of shoreline habitat. Unlike most Nebraska reservoirs, Harlan’s public land and recreational lands are administered by the U.S. Army Corps of Engineers.

This site is surrounded by extensive tracts of woodlands, brush, grasslands and weedy areas that attract a wide variety of eastern and western passerine species. It attracts large quantities of Bald Eagles, geese, ducks, gulls, American White Pelicans, Sandhill Cranes, and the occasional small group of Whooping Cranes during spring and fall. On the south side of the reservoir Greater Prairie-Chickens can sometimes be observed. Anything is possible on such a big waterbody. Some interesting sightings at Harlan over the last decade include Common Loon, Black-legged Kittiwake, Parasitic Jaeger, Little Blue Heron, White-faced Ibis, Black-necked Stilt and Sabine’s Gull.

In the winter, large numbers of Bald Eagles, gulls and waterfowl can be seen depending upon how much open water is present. There has been a Double-crested Cormorant rookery at the western end of the lake since 1995 and a Great Blue Heron rookery downstream from the dam. When lake levels are low, mudflats provide tremendous shorebird viewing especially on the western end south of Alma. Some wooded parks on the north side of the lake provide good habitat for woodland birds. Prairie grasslands and open farmland all around the lake offer good opportunities for open country birds. There is considerable public access along the river and around the Harlan County Reservoir. On the way to the reservoir from Republican City, watch for Burrowing Owls in the prairie dog colony. Also worth checking is the nearby Alma sewage lagoons.

Where to go in the park

This site offers a variety of habitats to explore with good access and opportunities for any type of birding be it by car, scope, or walking. Pheasant Ridge Walking Trail is paved trail from Methodist Cove to Alma City Park. The trail winds along the lake edge, through native prairies and dips down into forested drainages. No hunting is allowed in this area.

At the end of the North Outlet Park is the River’s Edge Nature Trail that winds through the forest below the dam. This trail offers opportunities to view a variety of woodland species. Don’t forget to wear orange on this trail during hunting season.